The United Nations Conference on Climate Change COP held from December 2 to 13, 2019) under the Presidency of the Government of Chile and with the logistical support of the Government of Spain. The designated President for the conference was Carolina Schmidt, Minister of Environment of Chile. What was the UN Conference on Climate Change about? The conference had been designed to accomplish the necessary and successive steps in the United Nations climate change negotiation process. With the agreement on the application of the rules of the Paris Agreement at COP24, held in Poland in 2018, the main objective is to review the pending issues for the full implementation of the Agreement. In addition, the conference served to increase ambition levels by 2020, the year in which countries have committed to delivering new and updated national plans of measures to combat climate change. Measures to combat climate change will be included in areas such as finance, transparency in measures against climate change, forests and agriculture, technology, capacity development, loss and damage, indigenous population, cities, oceans and gender equality.

2019’s annual UN climate conference, COP25 in Madrid, became the longest on record when it concluded after lunch on Sunday, following more than two weeks of fraught negotiations. It had been scheduled to wrap up on Friday. 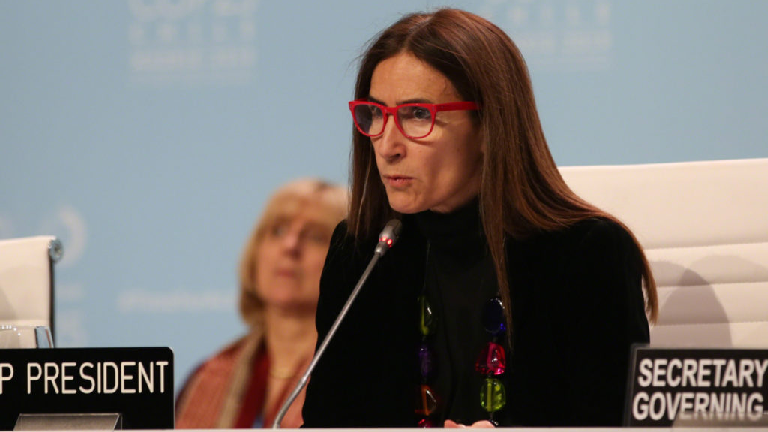 Nearly 27,000 delegates arrived in the Spanish capital in early December aiming to finalise the “rulebook” of the Paris Agreement – the operating manual needed when it takes effect in 2020 – by settling on rules for carbon markets and other forms of international cooperation under “Article 6” of the deal.

They also hoped to send a message of intent, signalling to the wider world that the UN climate process remains relevant – and that it recognises the yawning gap between current progress and global goals to limit warming.

This disconnect was highlighted by a huge protest march through the heart of the Spanish capital and by the presence of climate activist Greta Thunberg, who arrived from her transatlantic journey by sail just in time to make several high-profile appearances in the COP25 conference halls.

Ultimately, however, the talks were unable to reach consensus in many areas, pushing decisions into next year under “Rule 16” of the UN climate process. Matters including Article 6, reporting requirements for transparency and “common timeframes” for climate pledges were all punted into 2020, when countries are also due to raise the ambition of their efforts.

UN secretary general António Guterres said he was “disappointed” with the results of COP25 and that “the international community lost an important opportunity to show increased ambition on mitigation, adaptation & finance to tackle the climate crisis.”

Highlights of the COP24 in Katiwice

Negotiators at COP24 in Katowice reached agreement, bolstering the Paris accord.

UPDATE, December 15: International climate change negotiators announced late Saturday that they have reached an agreement at COP24 in Poland. The text charts a path forward for countries to set tougher targets for cutting greenhouse gases under the Paris climate agreement, as well as stronger transparency rules for countries in disclosing their emissions. However, questions on how to use markets to limit carbon dioxide remain, and discussions will continue next year. Read on for the context around these negotiations and why environmental groups, governments, and private companies were so concerned about the outcome of this conference.

An agreement between 200 nations at a major international climate change conference in Katowice, Poland, is taking longer than expected. The two-week meeting was supposed to wrap Friday. But as of Saturday, a full compilation of the Paris Agreement rulebook had been released, but a final deal still hadn’t been announced as critical details remained up for debate.

The goal of the 24th Conference of Parties (COP24) to the United Nations Framework Convention on Climate Change is to hammer out critical the details of the Paris climate agreement. Under the 2015 accord, countries set out to limit global warming to 2 degrees Celsius above preindustrial levels by 2100 at most, with a preferred target of 1.5 degrees Celsius.

However, the original pledged cuts in greenhouse gas emissions would not put the world anywhere near meeting these targets.

So the agreement included provisions for countries to meet regularly and ramp up their ambitions, all of which are voluntary. COP24 is the first time since Paris that countries are actually talking with each other about going beyond their initial commitments. That’s why this meeting is so important. That’s also why scientists and activists are pushing for even more ambitious commitments to reduce emissions in the final days of the negotiations.

“If the Paris agreement is actually going to live up to that model of voluntary bottom-up commitments, … ongoing ratcheting down of those commitments, then it has to happen at this first moment,” said Lou Leonard, senior vice president for climate and energy at the World Wildlife Fund, by phone from Katowice. “And if it doesn’t happen at this first moment, then it will call into question whether this ratcheting will actually work.”

The outcome of the negotiations became increasingly uncertain after President Trump in 2017 announced he would withdraw the United States from the accord.

For an agreement that hinges so much on cooperation and good faith, the worry was that without the US, the world’s second-largest greenhouse gas emitter, the deal would fall apart, that other countries would weaken their ambitions or sign an agreement so full of loopholes as to be useless.

For delegates, the goal is to nail down critical details, like how to verify that countries are actually progressing in cutting greenhouse gases, creating market mechanisms to control emissions, and coming up with ways to help developing countries finance a transition to cleaner energy sources.

It turns out countries are making some progress in tracking their emissions, but are still struggling with many of the financial issues associated with mitigating climate change. It’s yet another example of the tension between the threat of rising average temperatures and the fears of economic strain that hinder ambition in cutting greenhouse gases.

Fighting climate change is only getting harder

The literal and metaphorical backdrops of the COP24 negotiations highlight the enormousness of the challenge. Katowice is in the heart of Poland’s coal country and the conference is sponsored in part by Polish coal companies. The conference venue is literally festooned with coal.

The country as a whole gets almost 80 percent of its electricity from coal, a major greenhouse gas emitter. During the negotiations, Poland’s environment minister, Marcin Korolec, who is also serving as the president of COP24, was fired from this government post (He is slated to be replaced by Maciej Grabowski, a former deputy finance minister in charge of taxing shale gas).

But it’s not just Poland that can’t quit dirty energy. Global greenhouse gas emissions reached a record high in 2018 and are accelerating higher. 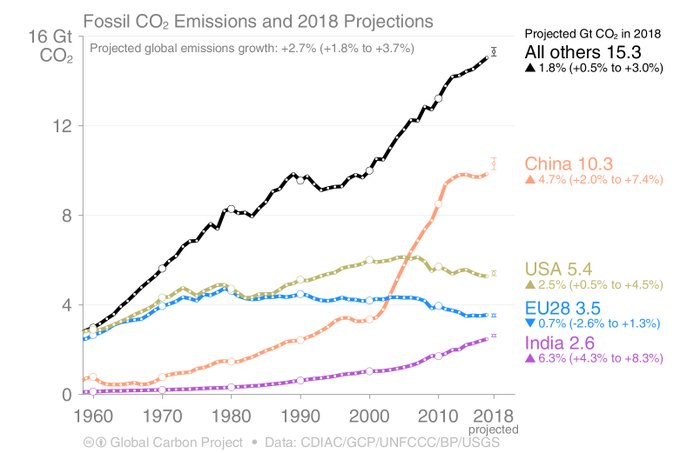 The world as a whole needs to sharply bend the emissions curve as fast as possible if the planet is to stay below 2 degrees Celsius of warming, let alone 1.5 degrees Celsius. And seven big countries, including the US, are well behind hitting the pledges they made in Paris, according to the UN Environment Program’s most recent annual “emissions gap” report.

So the agreement taking shape in Poland seems to be a mixed bag. “Some of the issues like transparency rules are going in the right direction, but market mechanism is a pretty big mess,” said Alden Meyer, director of strategy and policy for the Union of Concerned Scientists, speaking from Poland.

The first step in limiting greenhouse gases is to keep track of them and provisions on measuring and verifying carbon dioxide emissions inventories for different countries looks to be strong.

But countries are still struggling with the best way to deal with climate change around the world, whether it means deploying clean energy in their own countries, financing climate change adaptation in vulnerable regions, or pooling money to help more fossil fuel-dependent countries sever their ties to carbon-intensive energy. Some delegates, particularly those from island nations threatened by sea level rise, also want more stringent targets for greenhouse gases.

The US government is a major obstacle in climate negotiations, but not the only one

As Vox’s David Roberts has explained, the United States is undermining the success of the Paris agreement. It’s not just that Trump announced his intent to withdraw from the accord. The Trump administration has gone as far as to gleefully taunt delegates at COP24 with a panel promoting the use of more coal.

Unlike previous proposed international climate agreements, there’s no penalty or enforcement mechanism for breaching greenhouse gas targets. And the targets, remember, are set by countries for themselves.

Instead, the agreement hinges on peer pressure, which in turn requires countries to be open and transparent about their progress in fighting climate change.

So when the world’s second-largest carbon dioxide emitter decides not to play ball, it drastically weakens how much other countries can be shamed or prodded into limiting their emissions.

That in turn makes it more difficult to secure investments in clean energy, since the regulatory environment has become more volatile.

The US’s actions have given some cover to other countries who are less than enthralled with the prospect of cutting greenhouse gas emissions. At COP24, this manifested in a fight over how to acknowledge the findings of the recent IPCC special report on limiting warming to 1.5 degrees Celsius. A draft of the final text initially said that negotiators “welcome” the findings from more than 300 researchers.

But the US, joined by Russia, Saudi Arabia, and Kuwait, objected to the language and want the final text to “note” the IPCC report rather than “welcome” it.

“The United States was willing to note the report and express appreciation to the scientists who developed it, but not to welcome it, as that would denote endorsement of the report,” the US State Department said in a statement to the Associated Press. “As we have made clear in the IPCC and other bodies, the United States has not endorsed the findings of the report.”

Because of the rules of the Paris accord, the US can’t formally withdraw until after the 2020 election. But a consortium of US companies, investors, tribes, universities, and legislators have pledged to continue cutting carbon dioxide emissions in line with their commitments under the Paris accord.

Members of the We Are Still In coalition, which represents about half of the US population, are meeting with other negotiators as they highlight their own initiatives in fighting climate change to help encourage other countries to pursue their own. California, for example, has set a target of zero net carbon emissions by 2045, deploying aggressive policies to encourage electric cars, rooftop solar power, and batteries on the power grid to store variable renewable energy.

The hope is to bypass the Trump administration’s retrenchment on climate change action. However, activists are still not content with the pace of progress. Students in Poland staged a strike at the COP24 venue on Friday, demanding that countries set tougher emissions goals for themselves.

Observers say that whatever agreement that’s forged in Poland is only a first step. After representatives take the deal back to their home countries, their governments will still have to implement the rules and report back next year at the United Nations general assembly next September. That gathering will highlight just how far apart words and actions are on climate change.

“That will be the real acid test of ambition,” Meyer said.