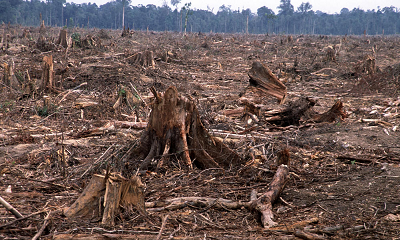 Deforestation, clearance or clearing is the removal of a forest or stand of trees where the land is thereafter converted to a non-forest use. Examples of deforestation include conversion of forestland to farms, ranches, or urban use. The most concentrated deforestation occurs in tropical rainforests. About 30% of Earth's land surface is covered by forests.

Deforestation occurs for multiple reasons: trees are cut down to be used for building or sold as fuel, (sometimes in the form of charcoal or timber), while cleared land is used as pasture for livestock and plantation. The removal of trees without sufficient reforestation has resulted in damage to habitat, biodiversity loss and aridity. It has adverse impacts on biosequestration of atmospheric carbon dioxide. Deforestation has also been used in war to deprive the enemy of vital resources and cover for its forces. Modern examples of this were the use of Agent Orange by the British military in Malaya during the Malayan Emergency and the United States military in Vietnam during the Vietnam War. As of 2005, net deforestation rates have ceased to increase in countries with a per capita GDP of at least Rs. 460,000. Deforested regions typically incur significant adverse soil erosion and frequently degrade into wasteland.

Disregard of ascribed value, lax forest management and deficient environmental laws are some of the factors that allow deforestation to occur on a large scale. In many countries, deforestation, both naturally occurring and human-induced, is an ongoing issue. Deforestation causes extinction, changes to climatic conditions, desertification, and displacement of populations as observed by current conditions and in the past through the fossil record. More than half of all plant and land animal species in the world live in tropical forests.

Other causes of contemporary deforestation may include corruption of government institutions, the inequitable distribution of wealth and power, overpopulation, and urbanization.

Situation of deforestation in Pakistan 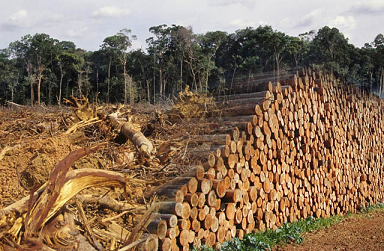 According to a report, while forests currently cover only 2.5 per cent of the country's land, Pakistan has one of the highest annual deforestation rates in Asia. The report says that more than 61,000 hectares (approx. over 151,500 acres) of forest land have been converted to non-forest use in the country since its inception. Since the current deforestation rate of 2.1 per cent and trend of land conversion from forest to other uses has not been checked, Pakistan could not meet its international commitments under the Millennium Development Goals to increase its forest cover from 2.5 per cent to six per cent by 20151.

The urgent measures recommended to the relevant authorities to curb the negative trend are immediate placement of a ban on forest land conversions, commercial harvesting and allotments; spread of awareness among lawmakers for proper legislation to restrict land conversions; and recovery of forest land from encroachers and its subsequent reforestation. In extremely important cases where conversion of forest lands becomes unavoidable, necessary provisions in the law must be made for compensatory forestation on twice the land being converted / allotted, the report recommends.

Mangroves depletion on the top

The highest rate of deforestation has been found in the Indus delta mangroves, which has depleted at a rate of around 2.3 per cent, while the coniferous forest depleted at 1.99 per cent and ravine forests at 0.23 per cent. The report says that over 99,711 acres of forest land in Punjab and 27,874-acre of forests in Sindh have been converted to non-forest uses. In this regard, it says, the beneficiaries remain some government departments, politicians and other influential people having close contact with respective governments. 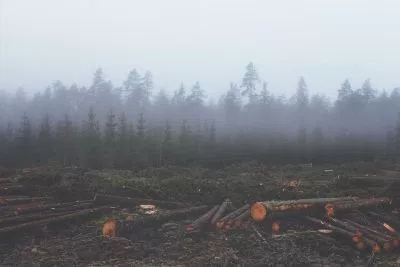 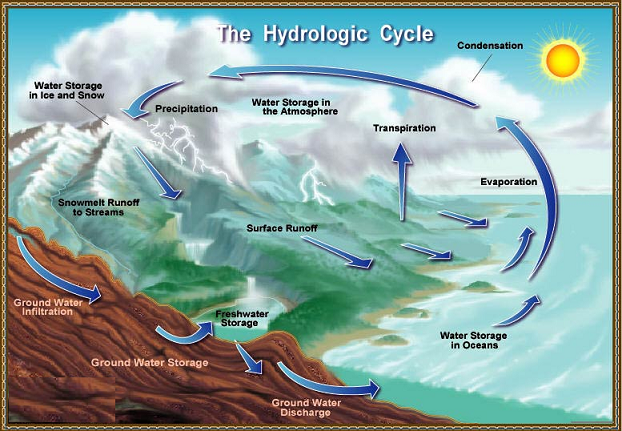 The water cycle is also affected by deforestation. Trees extract groundwater through their roots and release it into the atmosphere. When part of a forest is removed, the trees no longer transpire this water, resulting in a much drier climate. Deforestation reduces the content of water in the soil and groundwater as well as atmospheric moisture. The dry soil leads to lower water intake for the trees to extract. Deforestation reduces soil cohesion, so that erosion, flooding and landslides ensue.

Shrinking forest cover lessens the landscape's capacity to intercept, retain and transpire precipitation. Instead of trapping precipitation, which then percolates to groundwater systems, deforested areas become sources of surface water runoff, which moves much faster than subsurface flows. Forests return most of the water that falls as precipitation to the atmosphere by transpiration. In contrast, when an area is deforested, almost all precipitation is lost as run-off. That quicker transport of surface water can translate into flash flooding and more localized floods than would occur with the forest cover. Deforestation also contributes to decreased evapotranspiration, which lessens atmospheric moisture which in some cases affects precipitation levels downwind from the deforested area, as water is not recycled to downwind forests, but is lost in runoff and returns directly to the oceans. 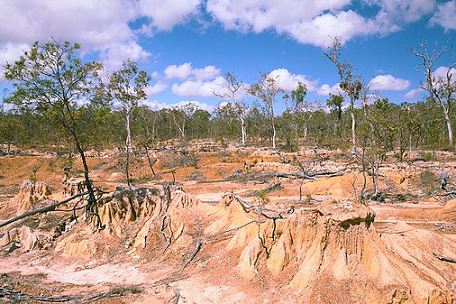 Undisturbed forests have a very low rate of soil loss (erosion), approximately 2 metric tons per square kilometre (6 short tons per square mile). Deforestation generally increases rates of soil loss, by increasing the amount of runoff and reducing the protection of the soil from tree litter. This can be an advantage in excessively leached tropical rain forest soils. Forestry operations themselves also increase erosion through the development of (forest) roads and the use of mechanized equipment.

Tree roots bind soil together, and if the soil is sufficiently shallow they act to keep the soil in place by also binding with underlying bedrock. Tree removal on steep slopes with shallow soil thus increases the risk of landslides, which can threaten people living nearby. 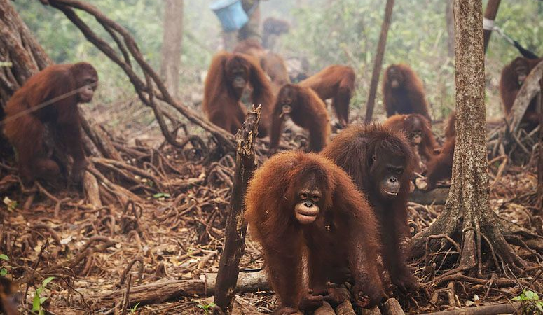 Deforestation on a human scale results in decline in biodiversity, and on a natural global scale is known to cause the extinction of many species. The removal or destruction of areas of forest cover has resulted in a degraded environment with reduced biodiversity. Forests support biodiversity, providing habitat for wildlife; moreover, forests foster medicinal conservation. With forest biotopes being irreplaceable source of new drugs, deforestation can destroy genetic variations (such as crop resistance) irretrievably.

Since the tropical rainforests are the most diverse ecosystems on Earth and about 80% of the world's known biodiversity could be found in tropical rainforests, removal or destruction of significant areas of forest cover has resulted in a degraded environment with reduced biodiversity. A study in Rondônia, Brazil, has shown that deforestation also removes the microbial community which is involved in the recycling of nutrients, the production of clean water and the removal of pollutants. A recent study of the Brazilian Amazon predicts that despite a lack of extinctions thus far, up to 90 percent of predicted extinctions will finally occur in the next 40 years1. 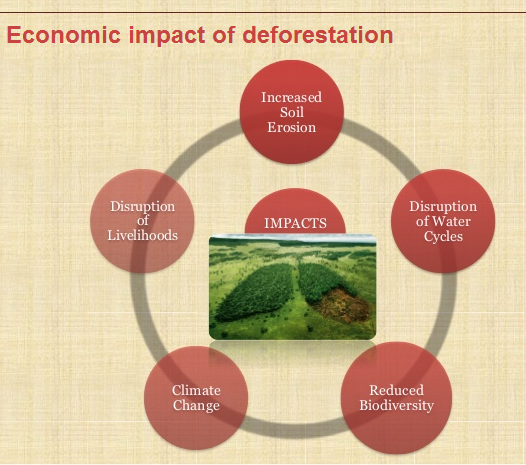 Damage to forests and other aspects of nature could halve living standards for the world's poor and reduce global GDP by about 7% by 2050, a report concluded at the Convention on Biological Diversity (CBD) meeting in Bonn in 2008.[71] Historically, utilization of forest products, including timber and fuel wood, has played a key role in human societies, comparable to the roles of water and cultivable land. Today, developed countries continue to utilize timber for building houses, and wood pulp for paper. In developing countries almost three billion people rely on wood for heating and cooking2.

The forest products industry is a large part of the economy in both developed and developing countries. Short-term economic gains made by conversion of forest to agriculture, or over-exploitation of wood products, typically leads to loss of long-term income and long-term biological productivity. West Africa, Madagascar, Southeast Asia and many other regions have experienced lower revenue because of declining timber harvests. Illegal logging causes billions of dollars of losses to national economies annually.

The new procedures to get amounts of wood are causing more harm to the economy and overpower the amount of money spent by people employed in logging3.

Trees are absolutely vital to life here on Earth, but they are also being destroyed at an alarming rate. We can make better choices in life to stop deforestation. So many of the choices we make throughout the day when we're shopping, eating, or even driving, are powered by deforestation. Trees are cut and burned down for a number of reasons. Forests are logged to supply timber for wood and paper products, and to clear land for crops, cattle, and housing. Other causes of deforestation include mining and oil exploitation, urbanization, acid rain and wildfires. According to the United Nation's Food and Agriculture Organization (FAO), over 33 million acres of forestlands that are lost annually around the globe, are responsible for 20% of human-caused greenhouse gas emissions.  Deforestation also contributes to air and water pollution, a loss of biodiversity, erosion, and climatic disruption. 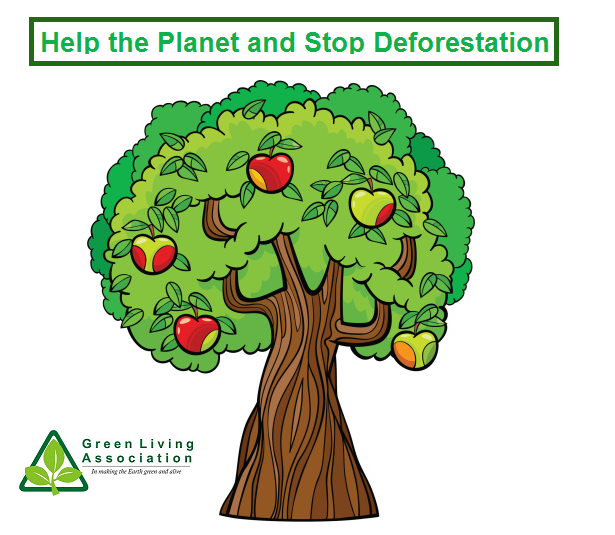 So what can you do about deforestation?

One easy way to combat deforestation is to plant a tree. But you can take it one step further by making sure the choices you make at home, at the store, at work, and on the menu don’t contribute to the problem. Here’s what you can do about deforestation.

2021 - As the turning point in addressing Climate Change
AEMEND issued safety protocols of COVID-19 for media in Pakistan
Wildfire smoke may spread infectious disease
Five ways to reduce your carbon footprint
Coronavirus: What has Covid done for climate crisis?
UN seeks protection of at least 30 percent of planet by 2030